The 17th anniversary of the Servant of God, Maurice Michael Cardinal Otunga was celebrated yesterday by catholic faithful at the Holy Family Basilica.

The Eucharistic celebration was led by His Eminence, John Cardinal Njue, and concelebrated by other priests among them Fr. Lawrence Njoroge, the vice postulator for the cause of beatification and canonization.

His Eminence noted the process of Otunga’s Beatification is almost concluding the second stage and urged Christians to keep praying for the process.

In the homily, Fr. Lawrence Njoroge recalled on the life of Cardinal Otunga describing him as just, honest and a firm leader who spoke and stood for the truth. “He was an example of how God wants us to live as human beings and as Kenyans. He touched everyone in a unique way,” he said.

Sr. Esther Ichugu, who is the secretary to Otunga’s beatification committee, urged Catholics to remain patient as the Archdiocese of Nairobi works on ensuring that it meets all the conditions for beatification and eventual canonisation of the late Cardinal.

“Christians have the responsibility to pray especially for a successful, extra ordinary miracle in order to move to the third stage which is beatification,” she said.

Cardinal Otunga, the first Kenyan Cardinal in the history of the Catholic Church, died on 6th September 2003 at the age of 80.

Your Eminence, John Cardinal Njue the petitioner of this cause, priests present, Religious men and women, Family members of the SOG Cardinal Otunga, all the Central committee members, all the faithful in this Mass and following us elsewhere.

Today we mark the 17th Anniversary of the Servant of God, Maurice Michael Cardinal Otunga’s death. “A gracious gift” to the church in Kenya and indeed to each one of us. Though sleeping, he is quite visible and present in our minds and hearts. His legacy is quite evidence and his reputation vibrant. Each one of us is longing for such a time that he will be exalted on the Altar and the obvious question is When?

Towards the end of last year 2019, we had the presence of the Postulator Dr. Waldery Hilgeman from Rome, and in collaboration with His Eminence John Cardinal Njue the Petitioner, they appointed Rev, Fr. Prof. Lawrence Njoroge (here present) as the new Vice Postulator. Fr. Lawrence embarked on the process with a lot of zeal and he been addressing some few points and gaps in the biography. We are certain that he will be through within a very short time. The biography is one part of the Positio. The “Positio” comprises of three (3) parts; i) the biography, ii) Summary of the Witnesses and iii) summary of the documents. This is the reason why it takes much time because; the three parts must be correlated.

In any process to sainthood, the mother church takes each step at a time and thoroughly examines each stage before proceeding to the next.

In his address, Dr. Hilgeman also emphasized very much on the reputation to Holiness which MUST go hand in hand with a Sign (miracle). He echoed the constant appeal by His Eminence to the Christians to pray for the cause and spread the devotion of the SOG Cardinal Otunga in order to have an extra-ordinary miracle. Each one of us therefore, has a great responsibility in this process.

Thank you all for the support you render to the Beatification office and the entire process.

In this corona pandemic era, let us implore God through the intercession of the Servant of God, who is a model of prayer to relief us of this sickness.”

Prayer for the Beatification of the Servant of God

O God, you granted your Servant Maurice Micheal Cardinal Otunga the Grace to be an exemplary pastor at the service of the church, making him a symbol of humility and love for the poor and less fortunate in the society, while denying and detaching himself from the pleasures of the world.

Grant, we beseech thee, that we may also learn to respond faithfully to the demands of the Christian vocation, converting all moments and circumstances of our life into opportunities of loving you and our neighbours with joy and kindness, and of serving the kingdom of God with humility.

We humbly request you to grant your servant cardinal Otunga a share in the Glory of Heaven which is promised to those who have served you well. Through his intercession Bless the Church, our country, Our Families and Children, and grant us the favours we humbly request.. Through Christ Our Lord. Amen. 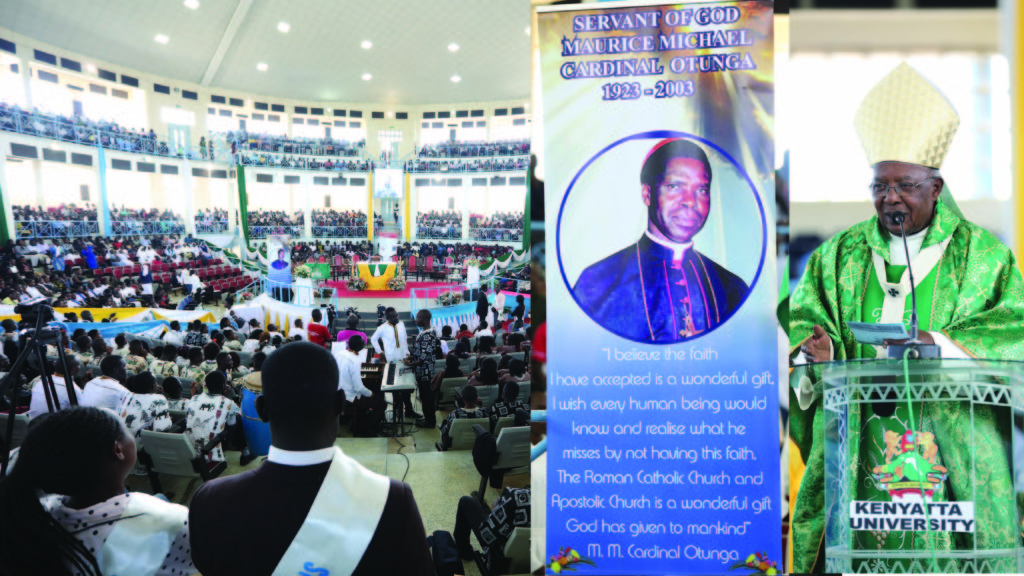